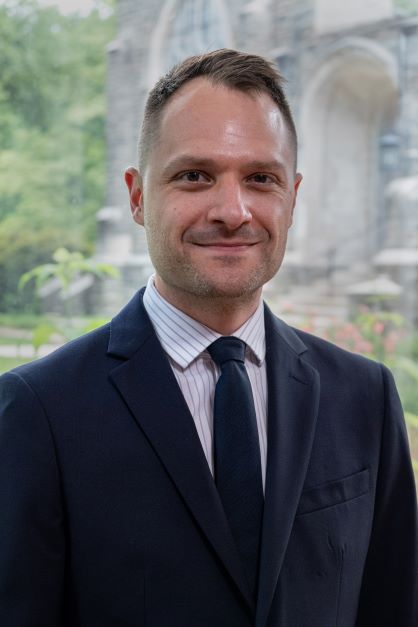 Assistant Professor of Biblical Studies and Director of Anglican Studies

The Rev. Dr. Reed Carlson specializes in the Hebrew Bible/Old Testament and the literature of Second Temple Judaism—a diverse body of writings which includes the Dead Sea Scrolls, early Jewish Pseudepigrapha, and the deuterocanonical books of the Old Testament (Apocrypha). His current research focuses on accounts of spirits and ecstatic religious experience in biblical and Second Temple Jewish literature—especially as they relate to anthropological and ethnographic studies of possession, trance, and other similar practices in the Global South and its diasporas. Dr. Carlson’s first book, Unfamiliar Selves in the Hebrew Bible: Possession and Other Spirit Phenomena (De Gruyter, 2022), is based on his dissertation, which was awarded the 2021 Manfred Lautenschlaeger Award for Theological Promise.

The son of Pentecostal ministers and an ordained minister in the Episcopal Church, Dr. Carlson is passionate about ecumenism in the church, especially among charismatic and progressive Christians. A former campus minister, Dr. Carlson embodies a pastoral concern for the whole student in his teaching—especially for learners from traditionally underserved and underrepresented communities. In addition to Old Testament content courses, Dr. Carlson also teaches introductory and intermediate Biblical Hebrew, and an upper-level elective called, “Spirit(s), Angels, and Demons in the Bible.”

Dr. Carlson is married to the Rev. Britta Meiers Carlson, an ELCA pastor and Ph.D. student in Practical Theology at the Boston University School of Theology. They enjoy exploring the urban and rustic locales of the northeast with their son.