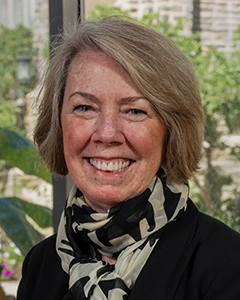 Charles A. Schieren Professor Emerita of Church in Society

In Dr. Day’s own words: “I have been honored to serve on the faculty of L.T.S.P. (and now U.L.S.) since 1985, teaching in the area of Church and Society. With an academic background in social ethics (at Union) and urban sociology (at Temple University), my focus in teaching, research (and life) has been at the intersection of faith and societal dynamics. Over the years I have prepared students to look critically at how the community of faith is shaped by, and shapes its social context. Only then, can we have ministries that make sense and are both faithful and effective.

More specifically, my attention has been drawn to the interaction of race, religion and violence. I have conducted research and published on: the diversity and construction of urban religion; African American churches and community organizing; Black church arsons and the volunteer rebuilding effort in the U.S.; church responses to HIV/AIDS in South Africa; and how faith communities make sense of gun violence. Theologically, I have been rooted in Public Theology and have published, spoken and been part of organizational building in this area. My major theological mentor is Dietrich Bonhoeffer, and I continue to dive deeply into his works in teaching and writing. Along the way I have been honored to be a visiting professor in a number of other schools including Princeton Seminary, Chester University (U.K.), Stellenbosch University (South Africa), Lutheran School of Theology in Chicago, and the Urban Ecologies program, at New York Theological Seminary.

Because public theology is both a matter of reflection and action, I have a long resume as an activist for social transformation. Prayer, as Rabbi Abraham Heschel and Dr. Martin Luther King, Jr advocated, is that which we do on our knees and on our feet. I believe the Church and interfaith community is continually called into difficult conversations and sustained work for justice and peace despite formidable challenges.

I am a lifelong Presbyterian and am ordained in the PCUSA. My husband, Jim Sicks, and I live in Cambridge, MD and have four grown children.”

And numerous chapters in collected volumes, articles and reviews in journals.